What you should know about pure linen sheets 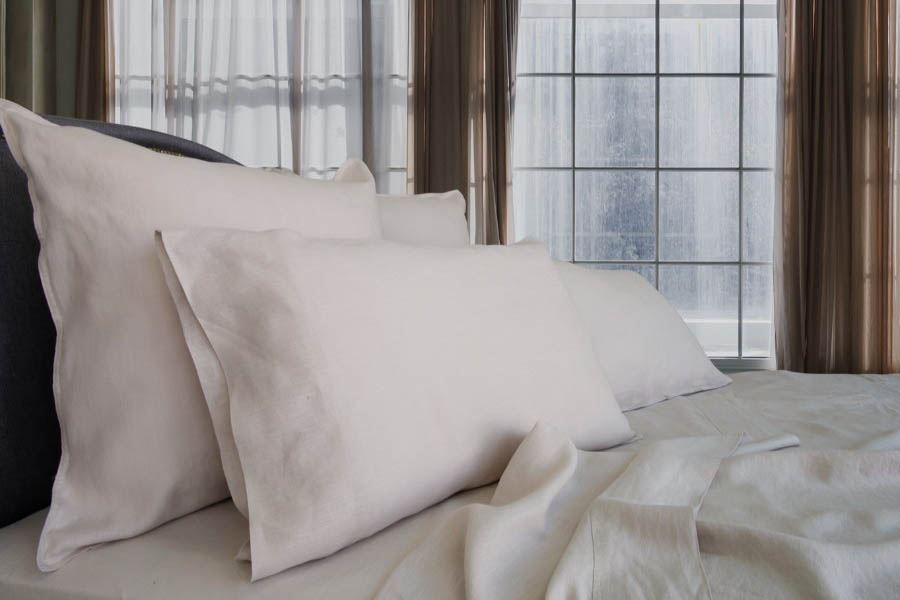 There are a lot of options for luxury bed sheets, but they largely boil down to three choices: cotton, pure linen, and silk.

Telling silk from cotton or linen is pretty easy. But many people get lost on the difference between linen and cotton. There’s definitely a difference in price — pure linen being more expensive. But is there really an improvement in quality?

We spend about a third of our lives sleeping. It’s worth the time to research your options and discover just what will give you the best night’s sleep. Without further ado, here’s our guide to pure linen.

Isn’t linen just the name for all bed coverings, from bedsheets to pillow cases and doona covers?

Yes, but it’s also a specific type of fabric.

While cotton is, obviously, made from the cotton plant, linen comes from the flax plant. Flax is one of the oldest cultivated plants in human history. There are many species of flax across the globe, and it has been used for both manufacturing — basket weaving, clothing, sheets — to medicine — the same flax plants that give us linen give us linseed and flaxseed oil.

Flax plant fibres are very strong and durable. This makes linen a particularly long-lasting fabric, that can remain in use for many years.

As trivia, the word “linen” literally means “made of flax”, as older Germanic languages called the plant “lein” or “line”. Why is linen becoming more popular?

Linen used to be the fabric of choice when it came to bedsheets — hence referring to all bedding broadly as “linen”.

Then over the last few decades it seemed to lose popularity. High thread count cotton sheets became all the rage. Egyptian cotton has been king of the bedroom for some time. It also didn’t hurt that cotton is noticeably more affordable than linen.

But now it’s making a comeback.

Because people are starting to realise that linen isn’t more expensive for the sake of it. It is genuinely a superior fabric for bedding.

And while it might be more expensive to buy a single set of linen sheets, that set will last longer than comparable cotton sheets. Cheaper sheets stop being cheap if you have to keep buying them.

Let’s break it down:

Linen and cotton share many features. They’re both hypoallergenic, and they both have antibacterial properties. Both fabrics breathe well.

The biggest difference lies in the properties of the fibres they’re made from. As we’ve said, linen is made from flax. The flax plant produces fibres that are much tougher and more durable than cotton fibres. Linen sheets are about twice as strong and durable as cotton sheets.

There is a downside here, however. Because they’re tougher, they’re more likely to break during the manufacturing process. Once the fabric is weaved, it will last a long time — but before until it’s together, it’s harder to weave.

This is one of the reasons the cost of linen is higher. There’s more work involved in making it.

Linen has a higher moisture absorbency than cotton. This, likewise, makes it longer-lasting.

Linen is a great insulator, and better suited for warmer clients than cotton. Being an insulator, it’s also suitable for cooler climates — the perfect year-round fabric.

Unfortunately, linen isn’t perfect. It does have some drawbacks. A combination of pure linen bedsheets and quilt covers will result in one of the most luxurious, comfortable sleeps you’ve had in years.

We have a range of quilt cover sets to suit any style. These sets include pillowcases, providing pure linen comfort from head to toe.

Our pure linen bedsheets will likewise add that comfort and insulation you desperately want during the hottest and coldest months.

Our pure linen ranges can be mixed and matched in styles to create contemporary looks to suit any home. Check out our range and try a set today — you’ll notice the difference.

Over 2000+ Satisfied Customers on Trustpilot

Sign up for our emails and be the first to find our for news,
deals and offers, including member only deals

Thank you for subscribing. You will get your e

This privacy policy sets out how we uses and protects any information that you give us when you use this website.
We are committed to ensuring that your privacy is protected. Should we ask you to provide certain information by which you can be identified when using this website, then you can be assured that it will only be used in accordance with this privacy statement.
We may change this policy from time to time by updating this page. You should check this page from time to time to ensure that you are happy with any changes.

We may collect the following information:

What we do with the information we gather

We require this information to understand your needs and provide you with a better service, and in particular for the following reasons:

We are committed to ensuring that your information is secure. In order to prevent unauthorised access or disclosure, we have put in place suitable physical, electronic and managerial procedures to safeguard and secure the information we collect online.

A cookie is a small file which asks permission to be placed on your computer's hard drive. Once you agree, the file is added and the cookie helps analyse web traffic or lets you know when you visit a particular site. Cookies allow web applications to respond to you as an individual. The web application can tailor its operations to your needs, likes and dislikes by gathering and remembering information about your preferences.

We use traffic log cookies to identify which pages are being used. This helps us analyse data about webpage traffic and improve our website in order to tailor it to customer needs. We only use this information for statistical analysis purposes and then the data is removed from the system.
Overall, cookies help us provide you with a better website by enabling us to monitor which pages you find useful and which you do not. A cookie in no way gives us access to your computer or any information about you, other than the data you choose to share with us.
You can choose to accept or decline cookies. Most web browsers automatically accept cookies, but you can usually modify your browser setting to decline cookies if you prefer. This may prevent you from taking full advantage of the website.

Links to other websites

Our website may contain links to other websites of interest. However, once you have used these links to leave our site, you should note that we do not have any control over that other website. Therefore, we cannot be responsible for the protection and privacy of any information which you provide whilst visiting such sites and such sites are not governed by this privacy statement. You should exercise caution and look at the privacy statement applicable to the website in question.

You may choose to restrict the collection or use of your personal information in the following ways:

Select Afterpay as your payment method

Use your existing debit or credit card

Complete your checkout in seconds

All your need is:

1) An Australian Visa or Mastercard debit/credit card; 2) To be over 18 years of age; 3) To live in Australia